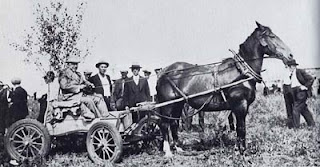 During the 1930's the Canadian economy was dependent on the export of raw materials such as wheat, lumber, and minerals, all of which saw foreign markets plummet after 1929.  Manufacturing companies in Canada were forced to cut back on production and lay off workers because of the dramatic slump in demand for the goods they made.  Unemployment skyrocketed.  Young, single men, frequently in search of their first jobs after leaving school, were particularly affected.  Many of them traveled across the country, hitching rides on railway freight cars, in what was all too often a vain search for work.

During the Great Depression, many desperate Canadian wrote directly to Prime Minister Bennet, Appealing to him for assistance.  There were few other places they could turn at that time, since there were few social welfare programs in place, and the need was so great.  Bennet a Millionaire, actually did answer many of these pleas for help, often enclosing a small amount of money in his reply.

Post a comment in the form of  a letter to Prime Minister Bennett as if you were either, an unemployed Canadian man traveling across the country in search of work, or a mother with four small children struggling to survive.  The letter should contain details of the problems the writer is facing along with an appeal to Bennet for help.  Remember, Bennet, his government and many wealthy Canadians thought it was unacceptable for people to get “something for nothing”.